I had called upon my friend Sherlock Holmes upon the second morning after Christmas, with the intention of wishing him the compliments of the season. ~ The Adventure of the Blue Carbuncle

"I was helping Uncle Sam to make dollars. Maybe mine were not as good gold as his, but they looked as well and were cheaper to make." ~ The Valley of Fear

Unwelcome truths are not popular. ~ The Valley of Fear 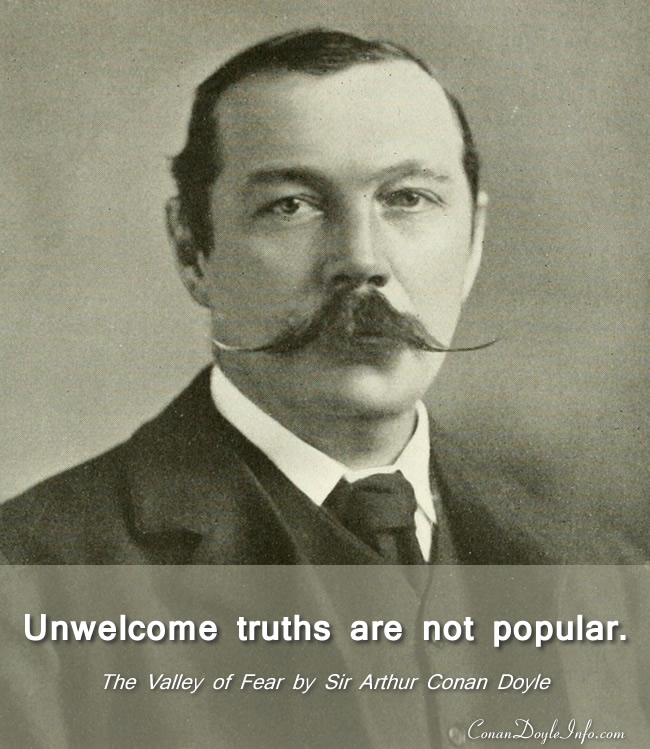 Strange indeed is human nature. Here were these men, to whom murder was familiar, who again and again had struck down the father of the family, some man against whom they had no personal feeling, without one thought of compunction or of compassion for his weeping wife or helpless children, and yet the tender or pathetic in music could move them to tears. ~ The Valley of Fear

He spoke wistfully of a sudden leaving, a breaking of old ties, a flight into a strange world, ending in this dreary valley, and Ettie listened, her dark eyes gleaming with pity and with sympathy - those two qualities which may turn so rapidly and so naturally to love. ~ The Valley of Fear

We all sat in silence for some minutes while those fateful eyes still strained to pierce the veil. ~ The Valley of Fear

All else in the man, his noble proportions, his fine features, and his frank bearing, fitted in with that jovial, man-to-man manner which he affected. Here, one would say, is a bluff, honest fellow, whose heart would be sound however rude his outspoken words might seem. It was only when those dead, dark eyes, deep and remorseless, were turned upon a man that he shrank within himself, feeling that he was face to face with an infinite possibility of latent evil, with a strength and courage and cunning behind it which made it a thousand times more deadly. ~ The Valley of Fear

"Amid the action and reaction of so dense a swarm of humanity, every possible combination of events may be expected to take place, and many a little problem will be presented which may be striking and bizarre without being criminal." ~ The Adventure of the Blue Carbuncle

"On the contrary, Watson, you can see everything. You fail, however, to reason from what you see. You are too timid in drawing your inferences." ~ The Adventure of the Blue Carbuncle