"They are mostly sent on by private inquiry agencies. They are all people who are in trouble about something, and want a little enlightening. I listen to their story, they listen to my comments, and then I pocket my fee." ~ A Study in Scarlet

"I'm not going to tell you much more of the case, Doctor. You know a conjuror gets no credit when once he has explained his trick, and if I show you too much of my method of working, you will come to the conclusion that I am a very ordinary individual after all." ~ A Study in Scarlet

"There's the scarlet thread of murder running through the colorless skein of life, and our duty is to unravel it, and isolate it, and expose every inch of it." ~ A Study in Scarlet 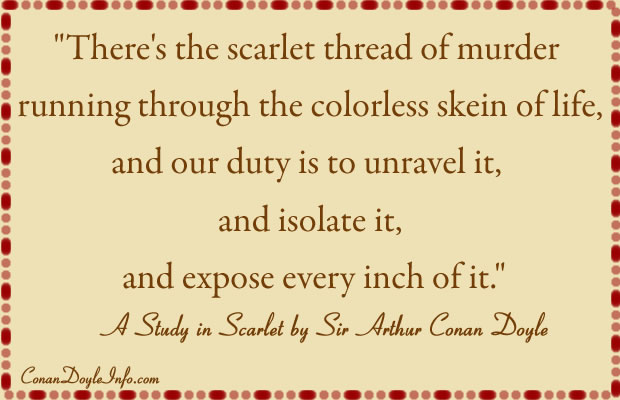 "There is nothing new under the sun. It has all been done before." ~ A Study in Scarlet

"What you do in this world is a matter of no consequence," returned my companion, bitterly. "The question is, what can you make people believe that you have done." ~ A Study in Scarlet

"I consider that a man's brain originally is like a little empty attic, and you have to stock it with such furniture as you choose. A fool takes in all the lumber of every sort that he comes across, so that the knowledge which might be useful to him gets crowded out, or at best is jumbled up with a lot of other things, so that he has a difficulty in laying his hands upon it. Now the skillful workman is very careful indeed as to what he takes into his brain-attic. He will have nothing but the tools which may help him in doing his work, but of these he has a large assortment, and all in the most perfect order. It is a mistake to think that that little room has elastic walls and can distend to any extent. Depend upon it there comes a time when for every addition of knowledge you forget something that you knew before. It is of the highest importance, therefore, not to have useless facts elbowing out the useful ones." ~ A Study in Scarlet

"From a drop of water," said the writer, "a logician could infer the possibility of an Atlantic or a Niagara without having seen or heard of one or the other. So all life is a great chain, the nature of which is known whenever we are shown a single link of it." ~ A Study in Scarlet

"Like all other arts, the science of deduction and analysis is one which can only be acquired by long and patient study, nor is life long enough to allow any mortal to attain the highest possible perfection in it. Before turning to those moral and mental aspects of the matter which present the greatest difficulties, let the inquirer begin by mastering more elementary problems. Let him, on meeting a fellow-mortal, learn at a glance to distinguish the history of man, and the trade or profession to which he belongs. Puerile as such an exercise may seem, it sharpens the faculties of observation, and teaches one where to look and what to look for." ~ A Study in Scarlet

"It is a capital mistake to theorize before you have all the evidence. It biases the judgment." ~ A Study in Scarlet

"Holmes!" I cried. "Is it really you? Can it indeed be that you are alive? Is it possible that you succeeded in climbing out of that awful abyss?" ~ The Adventure of the Empty House