"It was not a pleasant business, Watson. The fall roared beneath me. I am not a fanciful person, but I give you my word that I seemed to hear Moriarty's voice screaming at me out of the abyss." ~ The Adventure of the Empty House

It was indeed like old times when, at that hour, I found myself seated beside him in a hansom, my revolver in my pocket, and the thrill of adventure in my heart. Holmes was cold and stern and silent. As the gleam of the street-lamps flashed upon his austere features, I saw that his brows were drawn down in thought and his thin lips compressed. I knew not what wild beast we were about to hunt down in the dark jungle of criminal London, but I was well assured, from the bearing of this master huntsman, that the adventure was a most grave one. ~ The Adventure of the Empty House

"I think you want a little unofficial help. Three undetected murders in one year won't do, Lestrade. But you handled the Molesey Mystery with less than your usual -- that's to say, you handled it fairly well." ~ The Adventure of the Empty House

Our old chambers had been left unchanged through the supervision of Mycroft Holmes and the immediate care of Mrs. Hudson. As I entered I saw, it is true, an unwonted tidiness, but the old landmarks were all in their place. There were the chemical corner and the acid-stained, deal-topped table. There upon a shelf was the row of formidable scrap-books and books of reference which many of our fellow-citizens would have been so glad to burn. The diagrams, the violin-case, and the pipe-rack -- even the Persian slipper which contained the tobacco -- all met my eyes as I glanced round me. ~ The Adventure of the Empty House

"From the point of view of the criminal expert," said Mr. Sherlock Holmes, "London has become a singularly uninteresting city since the death of the late lamented Professor Moriarty." ~ The Adventure of the Norwood Builder

"It is an old maxim of mine that when you have excluded the impossible, whatever remains, however improbable, must be the truth." ~ The Adventure of the Beryl Coronet 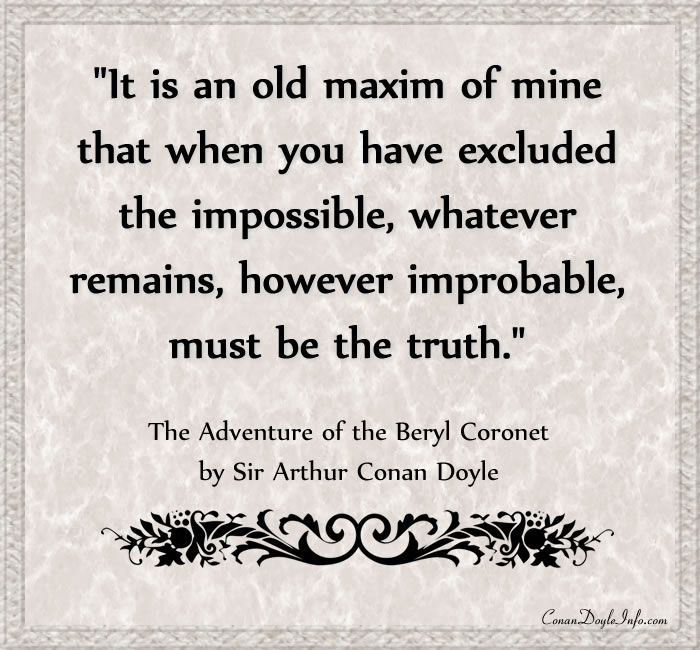 "I hardly looked at his face. His knees were what I wished to see." ~ The Red-Headed League

"My life is spent in one long effort to escape from the commonplaces of existence. These little problems help me to do so." ~ The Red-Headed League

"As a rule," said Holmes, "the more bizarre a thing is the less mysterious it proves to be. It is your commonplace, featureless crimes which are really puzzling, just as a commonplace face is the most difficult to identify." ~ The Red-Headed League