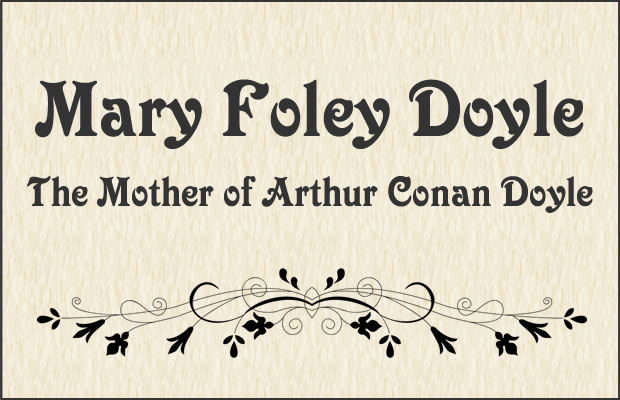 By anyone’s definition Mary Foley Doyle, known as “the Ma’am” by her son Arthur Conan Doyle, was an interesting woman.

She saved the Doyle family from ruin when her husband was institutionalized. She gave her children hope for tomorrow with tales of past glories and victories. She also had a mysterious relationship with a man fifteen years her junior.

Mary Foley (born in 1837) met her future husband, Charles, in Edinburgh where her mother ran a boarding house. Charles Doyle had recently arrived from England to take a civil service job and need a place to live. In 1855 Mary and Charles married. Over time they had seven children that survived to adulthood.

Charles did his best to provide for his large family. He supplemented his income with money he earned from painting and drawing. He was a talented artist who longed to devote himself to his art full-time. “In the shade”, painting by Charles Altamont Doyle

He was dismissed from his job. That same year Charles was sent to a hospital specializing in the treatment of alcoholics.

Later he developed epilepsy. At that time the condition was misunderstood and untreatable. As a result, Charles Doyle spent the rest of his life confined to a series of hospitals and asylums.

Tales of Knights and Ladies

Even before her husband was sent away life was hard for Mary Doyle. Charles was emotionally absent because of his depression and drinking. After he was sent away the financial worries were considerable.

However, Mary had a unique coping mechanism.

Mary had long been interested in the tradition of chivalry and tales of knights. She shared these stories and values with her children. She also told them they were of noble blood through her mother’s family.

The veracity of her claim is unproven, but the outcome of her actions is not. The stories gave the family the courage. The tales of deeds of bravery sustained the family as they dealt with the uncertainty of their situation.

The stories also inspired Mary’s oldest son, Arthur Conan Doyle, in other ways. He would later say that he got his love of literature and storytelling from his mother. He once said, “I am sure, looking back, that it was in attempting to emulate these stories of my childhood that I began weaving dreams myself.”

Conan Doyle openly discussed many aspects of his life. However, he was oddly silent regarding the subject of Dr. Bryan Waller.

To make extra money after her husband was institutionalized, Mary Doyle started taking in boarders. Dr. Bryan Waller was one of those boarders.

It would seem that he had a positive effect on the family. Dr. Waller’s presence financially stabilized the household. While he was only six years older than Arthur, certainly he must have acted as a role model for him. Arthur followed Waller into medicine and even attended the same university as Waller.

Waller and Mary Doyle unquestionably had a good relationship. So good that in 1882 she and two of her daughters moved into a cottage on Waller’s estate. She would live there, rent free, for over thirty years.

Historians have suggested that Waller and Mary had an affair. However, no one has been able to prove it. The closest Conan Doyle came to talking about the subject was when he said that Mary’s taking boarders “may have eased her in some ways, but was disastrous in others.”

Despite his feeling about his mother’s association with Dr. Waller, Conan Doyle had an excellent relationship with her.

He always sought her advice, but felt free to disagree with it. Her example inspired him in the face of adversity and respected her opinion in all matters.

Perhaps the following quote from Sir Nigel was inspired by Mary Doyle:

To his pure and knightly soul not Edith alone, but every woman, sat high and aloof, enthroned and exalted, with a thousand mystic excellencies and virtues which raised her far above the rude world of man.