Once Conan Doyle’s skis arrived in Davos, he set about teaching himself the sport.  He would later say, “On any man suffering from too much dignity, a course of skis would have a fine moral effect.” 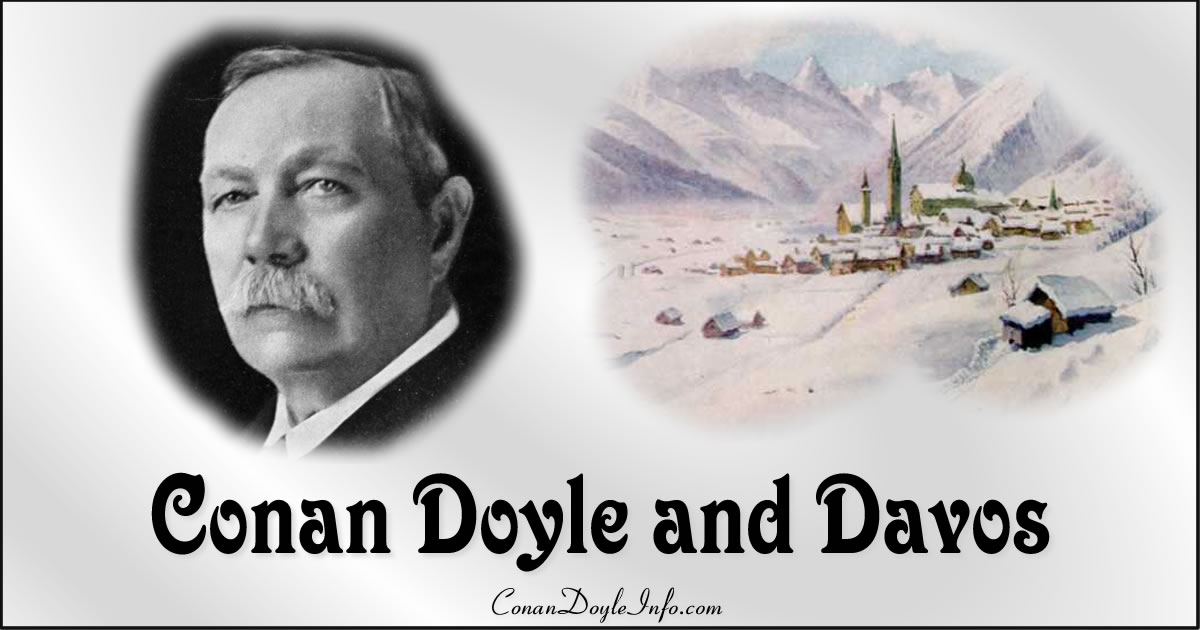 Arthur Conan Doyle is widely known as the creator of Sherlock Holmes.  A little-known fact is that he also helped to make skiing popular in Switzerland.

The Move to Switzerland Davos in Winter – from Tuberculosis in infancy and childhood : its pathology, prevention, and treatment” (1908)

In 1893, Conan Doyle and his wife moved to Davos Switzerland for his wife’s health.

Earlier that year Louise was diagnosed with tuberculosis.  The prognosis was grim.  She only had a few months to live.

However, Conan Doyle had heard that the climate of Switzerland was beneficial for tuberculosis patients.

While it didn’t cure the disease, it helped Louise enormously.  Instead of dying within a few months, she lived until 1906.

It seems odd to think of a time when people didn’t ski in Switzerland.  However, when Conan Doyle arrived in Switzerland in 1893 that was the situation.

While at school he’d participated in many sports including cricket, hockey, swimming and boxing.   So it was natural that he would look for similar recreation in Switzerland.

Conan Doyle had seen skiing a few years earlier in Norway.  He noted that the topography and climate of Switzerland was perfect for the sport.  He sent away to Norway for some skis.

While he had seen skiing done in Norway, he hadn’t done much of it himself.  Once his skis arrived in Davos he set about teaching himself the sport.  He would later say, “On any man suffering from too much dignity, a course of skis would have a fine moral effect.”

He was also able to find some local skiers, the Branger brothers.

The brothers had been practicing skiing for about a year before Conan Doyle’s arrival.  However, skiing seemed so odd to the locals that the brothers had actually taken to practicing after dark to avoid being mocked and teased by local townsfolk.

Once Conan Doyle mastered the basics, he and the Branger brothers decided that they wanted to put skiing to the test.

First, they scaled the Jacobshorn, a 7,700-foot mountain.

Conan Doyle could keep up with the more experienced skiers, but it was a challenging climb for him.  He stated, “Whenever you think yourself absolutely secure it is all over with you.”

Next the three men took a trip to Arosa, a nearby town that in the winter could only be reached by a long railroad trip.

The Brangers had made this journey before and knew it to be a treacherous one.  It involved crossing a pass of almost nine thousand feet in elevation and traversing some dangerous terrain.

On the other hand, the trip was not without enjoyment.

Conan Doyle wrote about the descent into Arosa for The Strand.  “But now we had a pleasure which boots can never give.  For a third of a mile we shot along over gently dipping curves, skimming down into the valley without a motion of our feet.  In that great untrodden waste, with snow-fields bounding our vision on every side and no marks of life save the tracks of chamois and of foxes, it was glorious to whizz along in this easy fashion.”

Conan Doyle predicted, “the time will come when hundreds of Englishmen will come to Switzerland for a skiing season.”  Due in part to his popularization of the sport, Conan Doyle was right.

Since 1970, Davos has been the host of the “Davos Symposium” also known as the World Economic Forum.  The attendees of the annual meeting are political and business leaders from around the globe.