"But he had not that supreme gift of the artist, the knowledge of when to stop." ~ The Adventure of the Norwood Builder

"What one man can invent another can discover," said Holmes. ~ The Adventure of the Dancing Men 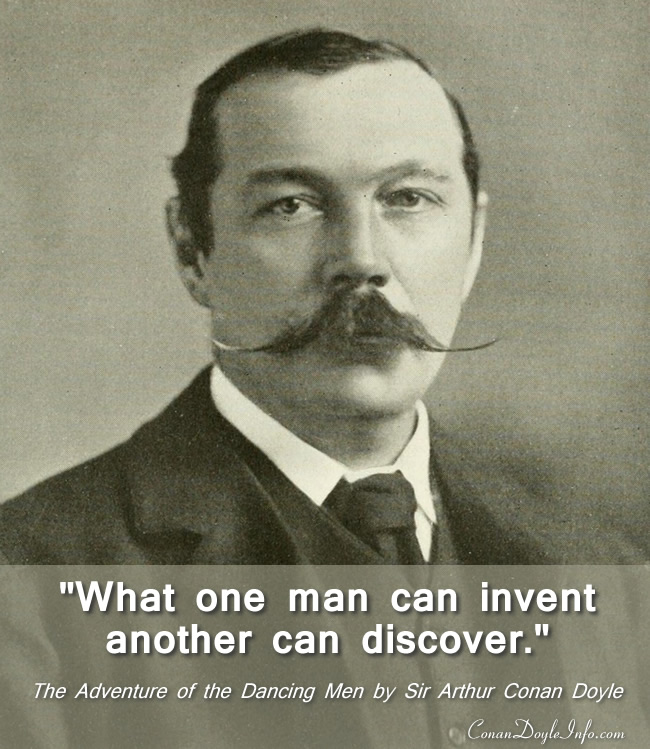 In all the broad landscape those were the only moving figures, the graceful girl sitting very straight upon her machine, and the man behind her bending low over his handle-bar with a curiously furtive suggestion in every movement. She looked back at him and slowed her pace. He slowed also. She stopped. He at once stopped, too, keeping two hundred yards behind her. Her next movement was as unexpected as it was spirited. She suddenly whisked her wheels round and dashed straight at him. He was as quick as she, however, and darted off in desperate flight. Presently she came back up the road again, her head haughtily in the air, not deigning to take any further notice of her silent attendant. ~ The Adventure of the Solitary Cyclist

"We had got as far as this, when who should walk in but the gentleman himself, who had been drinking his beer in the taproom and had heard the whole conversation. Who was I? What did I want? What did I mean by asking questions? He had a fine flow of language, and his adjectives were very vigorous." ~ The Adventure of the Solitary Cyclist

"The Press, Watson, is a most valuable institution, if you only know how to use it. " ~ The Adventure of the Six Napoleons

A rainy night had been followed by a glorious morning, and the heath-covered countryside, with the glowing clumps of flowering gorse, seemed all the more beautiful to eyes which were weary of the duns and drabs and slate grays of London. Holmes and I walked along the broad, sandy road inhaling the fresh morning air and rejoicing in the music of the birds and the fresh breath of the spring. From a rise of the road on the shoulder of Crooksbury Hill, we could see the grim Hall bristling out from amidst the ancient oaks, which, old as they were, were still younger than the building which they surrounded. ~ The Adventure of the Solitary Cyclist

"I must take the view, your Grace, that when a man embarks upon a crime, he is morally guilty of any other crime which may spring from it." ~ The Adventure of the Priory School

The rough-and-tumble work in Afghanistan, coming on the top of natural Bohemianism of disposition, has made me rather more lax than befits a medical man. But with me there is a limit, and when I find a man who keeps his cigars in the coal-scuttle, his tobacco in the toe end of a Persian slipper, and his unanswered correspondence transfixed by a jack-knife into the very centre of his wooden mantelpiece, then I begin to give myself virtuous airs. I have always held, too, that pistol practice should be distinctly an open-air pastime; and when Holmes, in one of his queer humours, would sit in an armchair with his hair-trigger and a hundred Boxer cartridges and proceed to adorn the opposite wall with a patriotic V. R. done in bullet-pocks, I felt strongly that neither the atmosphere nor the appearance of our room was improved by it. ~ The Musgrave Ritual

It was on a bitterly cold night and frosty morning, towards the end of the winter of '97, that I was awakened by a tugging at my shoulder. It was Holmes. The candle in his hand shone upon his eager, stooping face, and told me at a glance that something was amiss. ~ The Adventure of the Abbey Grange

"Come, Watson, come!" he cried. The game is afoot." ~ The Adventure of the Abbey Grange