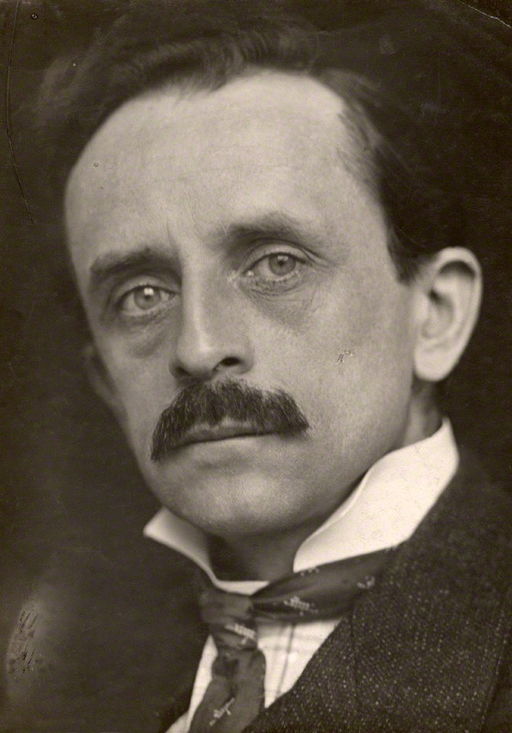 Early in his writing career Conan Doyle became involved with a new magazine, The Idler.  Through that connection he was able to meet other writers.

Jerome K. Jerome of Three Men in a Boat was one of the magazine’s founders.  Other writers for the magazine included Israrl Zangwill, Eden Phillpotts and Gilbert Parker.

The Idler is also where Conan Doyle first came to know the man who would write Peter Pan, James Barrie.

Barrie and Conan Doyle were both Scottish, both had attended Edinburgh University and both were avid cricket players.  In fact, Conan Doyle played on Barrie’s Allah-Akabarries team.  The team name was a combination of Barrie’s last name and an Arabic phrase meaning, “May the Lord help us.”

When Conan Doyle wrote about his five-foot-one friend he said he was a man, “about whom there is nothing small except his body.”

In 1892 Conan Doyle went on a lecture tour in Scotland.  While he was there he visited Barrie at Barrie’s boyhood home in Kirriemuir.  Conan Doyle enjoyed himself immensely.

A few weeks after returning from his Scottish tour Conan Doyle received a telegram from Barrie.  Conan Doyle was to come at once.  Barrie was ill and needed assistance.

Doyle rushed to Barrie’s side and discovered the problem was twofold.

Barrie had accepted a commission to write a libretto or text for an operetta.  The title of the operetta was Jane Annie, or The Good Conduct Prize and it wasn’t going well.

Additionally Barrie had bronchitis and the stress of trying to finish the libretto on time was driving him to a nervous breakdown.

Conan Doyle was eager to help his friend.  He threw himself into the work but was concerned.

Barrie had sketched out the plot and written the first act. Conan Doyle later said, “Ideas and wit were there in abundance.  But the plot itself was not strong, although the dialogue and the situations also were occasionally excellent.  I did my best and wrote the lyrics for the second act, and much of the dialogue, but it had to take the predestined shape.”

Conan Doyle was right to be concerned. 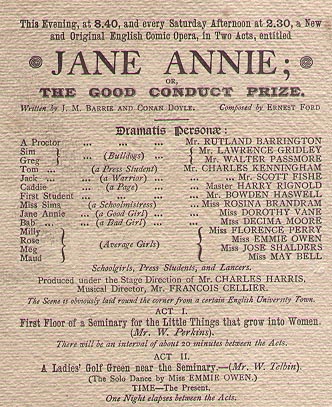 Program from Jane Annie in 1893

Despite the combined efforts of two great authors the operetta was a failure.  The critics hated it.  George Bernard Shaw reviewed it and said it was, “the most unblushing outburst of tomfoolery that two responsible citizens could conceivably indulge in publicly.”

The two men were quick to recover from the experience.  Barrie even used it as the basis of a spoof on a Sherlock Holmes novel entitled The Adventure of the Two Collaborators.  In the story two men visit Sherlock Holmes and Watson.  Their problem?  They want to know why people aren’t flocking to their new operetta.

While the operetta wasn’t a success the friendship was.  They were lifelong friends.  One of their few disagreements was over Conan Doyle’s beliefs in spiritualism.  Barrie requested that Conan Doyle not speak of it in his presence.

Conan Doyle died in 1930.  Barrie said this of him, “I have always thought him one of the best men I have ever known, there can never have been a straighter nor a more honourable.”