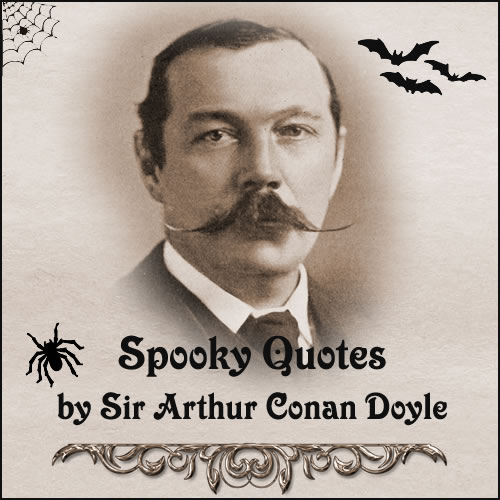 These spooky quotes by Arthur Conan Doyle are sure to give you goosebumps.

"They all agreed that it was a huge creature, luminous, ghastly, and spectral. I have cross-examined these men, one of them a hard-headed countryman, one a farrier, and one a moorland farmer, who all tell the same story of this dreadful apparition, exactly corresponding to the hell-hound of the legend. I assure you that there is a reign of terror in the district, and that it is a hardy man who will cross the moor at night." ~ The Hound of the Baskervilles

In the month of July of the year 1348, between the feasts of St. Benedict and St. Swithin, a strange thing came upon England, for out of the east there drifted a monstrous cloud, purple and piled, heavy with evil climbing slowly up the hushed heaven. ~ Sir Nigel

"Curupuri is the spirit of the woods, something terrible, something malevolent, something to be avoided. None can describe its shape or nature, but it is a word of terror along the Amazon. Now all tribes agree as to the direction in which Curupuri lives. It was the same direction from which the American had come. Something terrible lay that way. It was my business to find out what it was." ~ The Lost World

"Listen to me while I lay a curse upon you and yours!" she cries, as she raised her shriveled arms and blighted him with her flashing eyes: "As you have done to the house of Loring, so may God do to you, until your power is swept from the land of England, and of your great Abbey of Waverley there is nothing left but a pile of grey stones in a green meadow! I see it! With my old eyes I see it! From scullion to abbot and from cellar to tower, may Waverley and all within it droop and wither from this night on!" ~ Sir Nigel

A wave of panic passed over the vessel, and these rough and hardy men, who feared no mortal foe, shook with terror at the shadows of their own minds. ~ Sir Nigel 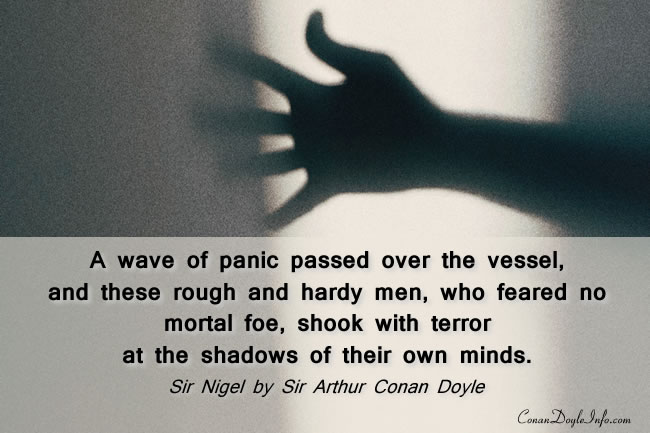 "Well," said she, after a pause, "if you despise my love, I must see what can be done with fear. You smile, but the day will come when you will come screaming to me for pardon." ~ The Parasite

She can project herself into my body and take command of it. She has a parasite soul; yes, she is a parasite, a monstrous parasite. She creeps into my frame as the hermit crab does into the whelk's shell. I am powerless. What can I do? I am dealing with forces of which I know nothing. ~ The Parasite

It is the sweetest spring within the memory of man. So green, so mild, so beautiful! Ah, what a contrast between nature without and my own soul so torn with doubt and terror! ~ The Parasite

Three quiet days. This hell fiend is like a cat with a mouse. She lets me loose only to pounce upon me again. I am never so frightened as when every thing is still. ~ The Parasite 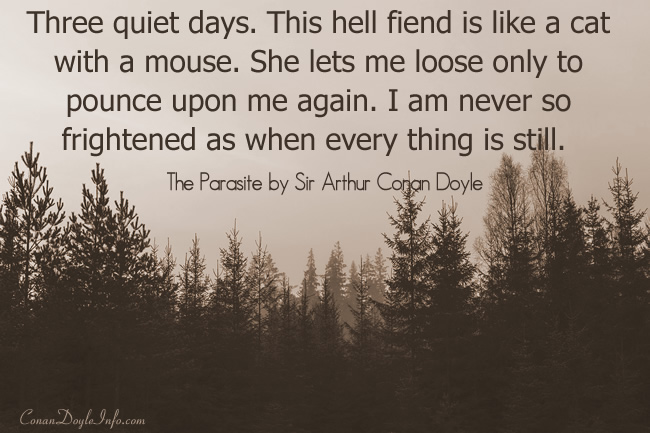 43 Spooky quotes found! Use the links below to see them all.