It is rather an alteration of perspective, a shifting of our sense of proportion, a vivid realization that we are insignificant and evanescent creatures, existing on sufferance and at the mercy of the first chill wind from the unknown. ~ The Poison Belt

I look out at the sunrise--that fateful sunrise which will shine upon an unpeopled world. The human race is gone, extinguished in a day, but the planets swing round and the tides rise or fall, and the wind whispers, and all nature goes her way, down, as it would seem, to the very amoeba, with never a sign that he who styled himself the lord of creation had ever blessed or cursed the universe with his presence. ~ The Poison Belt

"We have had for some years in this household a housekeeper--one Sarah, with whose second name I have never attempted to burden my memory." ~ The Poison Belt

The future was with Fate. The present was our own. ~ The Poison Belt 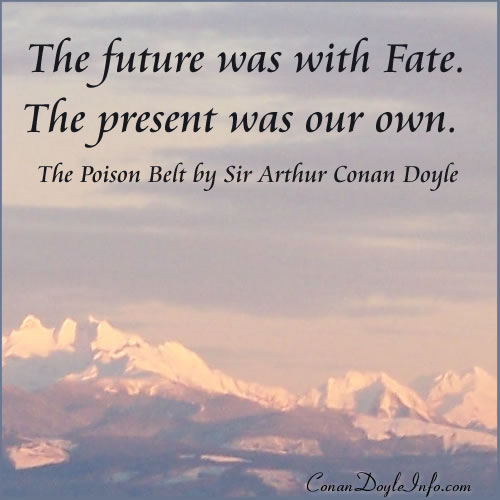 "The true scientific mind is not to be tied down by its own conditions of time and space. It builds itself an observatory erected upon the border line of present, which separates the infinite past from the infinite future. From this sure post it makes its sallies even to the beginning and to the end of all things." ~ The Poison Belt

"Great sorrow or great joy should bring intense hunger--not abstinence from food, as our novelists will have it." ~ The Poison Belt

How wise and how merciful is that provision of nature by which his earthly anchor is usually loosened by many little imperceptible tugs, until his consciousness has drifted out of its untenable earthly harbor into the great sea beyond! ~ The Poison Belt