The Land of Mist Quotes

"Just as an octopus may have his den in some ocean cave, and come floating out a silent image of horror to attack a swimmer, so I picture such a spirit lurking in the dark of the house which he curses by his presence, and ready to float out upon all whom he can injure." ~ The Land of Mist

It was certainly a depressing place, with a huge, gambrel roof which came down over the upper windows and nearly obscured them. There was a half-moon, and by its light they could see that the garden was a tangle of scraggy, winter vegetation, which had, in some places, almost overgrown the path. It was all very still, very gloomy and very ominous. ~ The Land of Mist

What was it? They could not tell themselves. They only knew that the black shadows at the top of the staircase had thickened, had coalesced, had taken a definite, batlike shape. ~ The Land of Mist

"There seems to me to be absolutely no limit to the inanity and credulity of the human race. Homo Sapiens! Homo idioticus!" ~ The Land of Mist

People who are in earnest are always interesting, whether you agree with them or not. ~ The Land of Mist

How sad to be deceived upon so intimate a matter as this, to be duped by impostors who used their most sacred feelings and their beloved dead as counters with which to cheat them. ~ The Land of Mist

"Do you know anything on earth which has not a dangerous side if it is mishandled and exaggerated?" ~ The Land of Mist 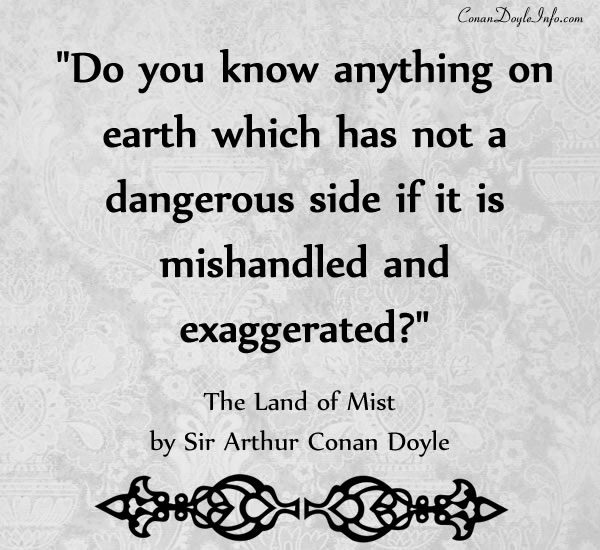 It was admitted on all sides that Challenger's opening half-hour was a magnificent display of oratory and argument. His deep organ voice -- such a voice as only a man with a fifty-inch chest can produce -- rose and fell in a perfect cadence which enchanted his audience. ~ The Land of Mist

Surely man need not trouble himself with grotesque speculations as to the nature of life beyond the grave. We had enough to do in this world. Life was a beautiful thing. The man who appreciated its real duties and beauties would have sufficient to employ him without dabbling in pseudo sciences which had their roots in frauds, exposed already a hundred times and yet finding fresh crowds of foolish devotees whose insane credulity and irrational prejudice made them impervious to all argument. ~ The Land of Mist

Like many men who override the opinions of others, Challenger was exceedingly sensitive when anyone took a liberty with his own ~ The Land of Mist